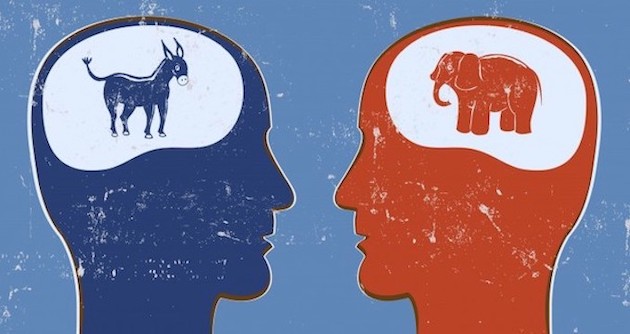 (Today’s article is an adaptation from one of Doug’s speeches.)

It used to be that America was a country of free thinkers.

"Say what you think, and think what you say." That’s an expression you don't hear much anymore.

Regrettably, the US is no longer the land of the free and the home of the brave. It’s become the land of whipped and whimpering dogs that roll over on their backs and wet themselves when confronted with authority.

Now, why are Americans this way? Let me give you two reasons—though there are many more.

First, there's a simple absence of virtue. Let’s look at the word virtue. It comes from the Latin vir, which means manly, even heroic. To the Romans, virtues were things like fortitude, nobility and courage. Those virtues are true to the root of the word.

When people think of virtues today they think of faith, hope, charity—which are not related to the word’s root meaning. These may pass as virtues in a religious sense. But, outside a Sunday school, they’re actually actually vices. This deserves a discussion, because I know it will shock many. But I’ll save that for another time.

An absence of virtues and the presence of subtle vices is insinuated throughout society. Worse, overt vices like avarice and especially envy are encouraged. Envy, in particular will become a big vice in the years to come. It’s similar to jealousy, but worse. Jealousy says “You have something I want; I’ll try to take it from you”. Envy says “You have something I want. If I can’t take it from you, I’ll destroy it, and hurt you if I can.” Jealousy and envy seem to motivate most Democratic Party presidential candidates. No wonder America is in rapid decline.

A second reason is unsound philosophy. The reigning philosophy in the US used to be based on individualism and personal freedom. It's now statism and collectivism. But most people don’t think about philosophy—or even have a consistent worldview. More than ever, they do what seems like a good idea at the time.

The average American has problems. But his rulers are something else again. Most of the people running the US are either knaves or fools. How do we know if we are dealing with a knave or a fool? In other words, are you dealing with somebody who is evil or just stupid? To give a recent, but classic, example, are you dealing with a Dick Cheney or a George W. Bush? Do you prefer the knavish Obama, or the knavish Biden? The foolish Trump, or the foolish Pence. Not much of a real choice anywhere…

One of the relatively few laws I believe in is Pareto’s Law. Most people are familiar with it as the 80-20 rule—20% of the people do 80% of the work, 20% commit 80% of the crime, and so forth. It also applies to character and ethics. Most people—80%—are basically decent. What about that other 20%? Let's call them potential trouble sources because they can go either way. But 20% of that 20%—4%—are the sociopaths; they consistently have bad intentions. They’re usually hiding under rocks. But they like to emerge at election time.

In normal times when everything's going along well, they can look normal. They'll deliver the mail, or sell shoes or stocks. They’ll pet the dog, and play softball on weekends. But when circumstances in society get ugly, and reach a certain point, they start evidencing themselves. The rest of the 20% start swinging along with them. That's the place where we are right now in the US. It’s Pareto’s Law in operation. You can see it in basically all the Democratic Party’s candidates—Bernie, Pocahontas, AOC, and two dozen others.

A lot of people believe in American Exceptionalism. A good argument can be made for America having been exceptional in the past. It’s factually correct that America is the only country founded on the principles of individualism and personal freedom. It was actually different. It was special, even unique. But I don't think it's true anymore.

Of course all the world’s countries like to believe they're special or better than the rest. But they’re only different on the surface, in trivial ways. None—other than America—value individualism and personal freedom as founding virtues. Look at Russia throughout the 20th century. It was a phenomenal nightmarish disaster in Soviet times.

Look at Germany during the ‘30s and ‘40s. China, under Mao for 30 years, was the home of institutionalized, industrial scale mass murder. The same is true in lots of other countries… Cambodia, Rwanda, the Congo. There are dozens of other countries where bloody chaos reigned over the last century. But not the US. It was different.

But what if America has ceased to exist? What if it’s been transformed into just another nation state called the United States, with very different ideals and values? Why should it have a different fate than those other countries? I don't see any reason why that would be the case.

But if 80% of Americans are basically decent, well-intentioned people, what is going wrong and why?

Let me give you three reasons… although there are many others.

Number one, as I indicated earlier, Americans no longer have any philosophical anchor. They no longer share a national mythos—individualism, personal freedom, free minds, and free markets are now mocked. They may have some nebulous ideas about ethics that they picked up from the Boy Scouts. But they think all political and economic systems—and certainly all cultures—are equally good. The reigning philosophy is a mixture of cultural Marxism, identity politics, anti-male feminism, and anti-white racism.

I suppose it was inevitable in a country where a large plurality of people are dumb enough to spend four years and several hundred thousand dollars to be indoctrinated with those values.

The second thing is fear. It’s a reigning emotion in this country among the diminishing middle class.

Desperation and apathy characterize the growing lower classes. No wonder they're cemented to the bottom of society. It's a rare person that rises from the lower class because of those attitudes.

How about the upper classes? Their dominant emotions are avarice and arrogance; they think they're superior because they have more money. In many cases they’re rich not because they produce anything. But because they’re cronies, benefiting from the flood of money coming from the Fed, or the avalanche of laws and regulations coming from the Congress and the President.

America is still basically a middle-class country, although becoming less and less that way almost daily. And fear is the dominant emotion of the middle class. Fear of losing everything they have. Fear of losing their jobs. Fear they won’t be able to meet the credit card payments, the car payments, the mortgage payment. Fear they can't afford to send their kids to college—which is a mistake incidentally. But that’s another story.

The whole country is driven by fear… and it’s not a good thing. Deimos and Phobos, those two moons circling Mars are now circling the US, along with Kakos and Chazos.

The third, and perhaps most critical reason the US is going downhill—beyond a lack of a philosophical anchor and an atmosphere of fear—is a reflexive belief in government.

The United States used to be more like Switzerland, which is by far the most prosperous country in Europe. When you ask the Swiss, "Who's the president of Switzerland?", It's rare that anyone can tell you. It's academic. However, nobody cares. He doesn't do anything. Politics aren’t a big part of their lives.

But today in the US, people have come to view the government as a cornucopia. People expect it to solve all their problems. And that’s a real problem. Government is a genuine growth industry, and it attracts the worst type of people. Government is inevitably where sociopaths—the 4% and the 20%—are drawn. Washington draws sociopaths like a pile of dog droppings draws flies.

It's perfectly predictable. And why is that? Mao said it best, "The power of the state comes out the barrel of a gun." Government is about some people controlling other people. That's what attracts sociopaths, and that's why they go to Washington.

But enough bad news… what is it that makes things better in the world? Well, there are two things.

One is technology. The good news is there are more scientists and engineers alive today than have lived in all of earth's history previously combined. And they're continually increasing our control of nature. For most people, life is no longer “solitary, poor, nasty, brutish, and short”, as Hobbes said. Technology is advancing at the rate of Moore’s law. And that improves the standard of living.

The second thing is savings. Individuals, like squirrels, are genetically wired to produce more than they consume. The difference between production and consumption can be saved. That creates capital. And capital enables technology. That creation of wealth should continue, barring a world war. Or most of the world’s governments acting more like Venezuela or Zimbabwe…. Which is quite possible.

So, in conclusion, I have some good news, and some bad news.

In the looming Greater Depression, most of the real wealth in the world will still exist. It's just going to change ownership.

Hopefully, you’ll be among those who aren’t adversely affected.

Editor's Note: Unfortunately most people have no idea what really happens when a government goes out of control, let alone how to prepare…