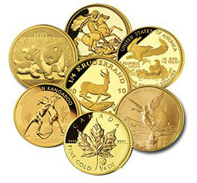 If you hold precious metals in your portfolio, there is a good chance you fear hyperinflation and the crash of fiat currencies.

You probably distrust governments in general and believe they are self-serving and have no interest in your economic well-being. It is likely that your holdings in gold are your lifeline – your hope to get you through these times while holding on to your wealth.

But have you ever given any thought to the possibility of having this lifeline confiscated by the authorities?

In my conversations with friends and associates, I have often raised this question. The typical responses:

“I'll deal with that if and when it happens.”

“I just wouldn't give it to them.”

I consider these “wishful thinking” responses.

It's an interesting thought that the greatest threat to gold and silver investment might not be the possibility of losing on the speculation, but the government taking it away from you. It's a thought that I've found few want to even think about, let alone discuss.

If you fall into this camp, you're in good company. Some of the forecasters whom I respect most highly also treat it either as unlikely or at best, “something we may need to look at in the future.” To date, in conversing with top advisors worldwide, the two primary reasons they believe gold will not be confiscated are:

Yes, this is quite so. They would be changing their official view… which, of course, they do all the time. But I submit that all that they need to do is put the proper spin on it.

I expect that this is also true, but that a plan will be put in place to deal with that resistance.

We'll address both of these assertions in more detail shortly, but first, a bit of history.

In 1933, Franklin Roosevelt came into office and immediately created the Emergency Banking Act, which demanded that all those who held gold (other than personal jewelry) turn it in to approved banks. Holders were given less than a month to do this. The government then paid them $20.67 per ounce – the going rate at the time. Following confiscation, the government declared that the new value of gold was $35.00. In essence, they arbitrarily increased the value of their newly purchased asset by 69%. (This alone is reason enough to confiscate.)

Today, the US government is in much worse shape than it was in 1933, and it has much more to lose. The US dollar is the default currency of the world, but it's on the ropes, which means the US economic power over the rest of the world is on the ropes.

I think that readers will agree that they will do anything to keep from losing this all-important power.

The US government has essentially run out of options. At some point, the fiat currencies of the First World will collapse, and some other form of payment will be necessary. Yes, the IMF is hoping to create a new default currency, but that, too, is to be a fiat currency. If any country were to produce a gold-backed currency in sufficient supply, that currency would likely become the desired currency worldwide. Fractional backing would be expected.

As most readers will know, the Chinese, Indians, Russians, and others see the opportunity and are building up their gold reserves quickly and substantially. If these countries were to agree to introduce a new gold-backed currency, there can be little doubt that they would succeed in changing the balance of world trade.

That said, the US government is watching these countries just as we are, and they are aware of the threat of gold to them.

The US government ostensibly has approximately 8,200 tonnes of gold in Fort Knox, although this may well be partially or completely missing. Additionally, it ostensibly holds a further 5,000 tonnes of gold in the cellar of the New York Federal Reserve building. Again, there is no certainty that it is there. In general, the authorities don't seem to like independent audits.

In fact, there are rumors that the above vaults are nearly or completely empty and that the above quoted figures exist only on paper rather than in physical form. While there is no way to know this for sure, it's not out of the question.

Either way, if the US and the EU could come up with a large volume of gold quickly, they could issue a gold-backed currency themselves. It's a simple equation: The more gold they have = the more backed notes they can produce = the more power they continue to hold. By seizing upon the private supply of their citizens, they would increase their holdings substantially in short order.

Either that or they could just give up their dominance of world trade and power… What would you guess their choice would be?

It is entirely possible that the US government (and very likely the EU) has already made a decision to confiscate. They may have carefully laid out the plan and have set implementation to coincide with a specific gold price.

So how would this unfold? Let's imagine a fairly extreme scenario and ask ourselves if it could be pulled off effectively:

Again, this hypothetical scenario is an extreme one. The reader is left to consider just how likely or unlikely this scenario is and what that would mean to his wealth.

But bear this in mind: If the above scenario were to take place soon, the average citizen would have mixed feelings. They would be glad that the “evil rich” had been taken down a peg, but they would worry about the idea of the government taking things by force, because they might be next. It would therefore be in the government's interests to implement confiscation only after the coming panic sets in – after the next crash in the market, after it becomes plain to the average citizen that this really is a depression and he really is in big trouble. Then he will be only too glad to see the “greedy rich” go down, and he won't care about the details.

As terrible as the thought is, it seems unlikely to me that the government will not confiscate gold, as they have little to lose and so much to gain.

Those who own gold would prefer to think that this cannot happen, but they have quite a lot riding on that hope and precious little evidence to support it.

Investors are, by their very nature, planners. It may take a community of investors to develop a legal plan to deal with the above eventuality. Time to get started.

The government can't easily confiscate what's outside its own borders, which is why it's working night and day to make it as difficult as possible for you to protect your assets abroad. This sad reality means that you need to take action before it's too late. Your first step? Learn how to start internationally diversifying your wealth – and your life. From investing in international markets and opening offshore bank accounts to setting up an offshore LLC or annuity, Going Global will tell you how and where to expatriate your wealth. It also presents solid, up-to-date information on internationalizing your life, from getting a second passport to choosing a good place to live.

Don't allow yourself to be milked by your home government any more. Get started on internationalizing your life today… while it's still possible.