This strategy forces you to step out of your comfort zone… but if you're willing to make the leap, you have a real shot at scoring extraordinary profits.

Right now, there are a number of financial “storms” developing around the globe. These storms are presenting us with incredible opportunities.

In this article I'll discuss the proprietary tool I created to make sure none of these opportunities slip through the cracks. And I'll share the top two markets it's telling us to buy right now…

Now, at its core, the secret powering this approach is simple… it allows you to zero in on rare moneymaking moments most people don't even realize exist.

Specifically, the tool I use automatically funnels in key data points from every industry in every major country around the world. It then pinpoints the richest crisis markets for us to pick up elite businesses at bargain prices.

I call it the “Value Radar.”

As I mentioned, the Value Radar is simple. It looks for two characteristics:

A hot market, such as one trading near its all-time high—like the S&P 500 in the U.S.—or anything being cheered on by the financial media is exactly what I’m not looking for.

I'm looking for markets afflicted with maximum pessimism. And there’s always a bottom-of-the-barrel crisis market somewhere, where we can buy cheap from shell-shocked investors looking to get out.

The performance I’m looking for is a big decline from a market’s five-year high.

To make sure the comparisons are apples to apples, I measure prices in the same currency, U.S. dollars.

Next, I look at dividends. Dividends are the most reliable simple indicator of true value. They're actual cash payments. They are real, and nothing is easier to measure or harder to fake. It’s astounding what you can get in dividends alone when a market reaches bottom, something a lot of people have forgotten.

Double-digit dividend yields are a sign that sellers have panicked. They’re a clue that investors have dumped shares in profitable companies.

The Value Radar is all about finding opportunities in crises to buy the highest-quality assets at bargain prices. It’s not limited to any asset class or industry. I’m simply looking for exceptional upside.

The stocks I recommend from the Value Radar can be bought as easily as buying shares in any U.S. stock. As long as you have an ordinary brokerage account with a company like E-Trade, TD Ameritrade, or Scottrade, you can start taking advantage of these little-known opportunities.

Now, let me show you what the Value Radar is pinpointing today…

Looking at the chart below, we’re most interested in the upper right corner. I’ve circled the sweet spot that shows the most beaten-up crisis markets with the highest dividend yields. It’s the key to finding elite businesses at bargain prices. 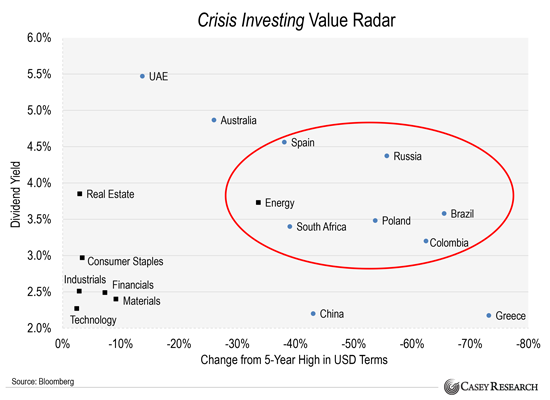 I want to focus on two markets that show up in the sweet spot: South Africa and energy.

The country has delivered phenomenal crisis-investing profits in the past.

Doug Casey made one of his biggest percentage hits when he bought South African gold stocks in 1976, a time when many were yielding 30%–60% in dividends (this is not a misprint). Those dividends doubled and redoubled several times as gold rose to its 1980 highs.

It was a classic crisis-investing situation.

At the time, two things were driving sentiment toward maximum pessimism:

But the conventional wisdom was wrong. South Africa didn’t collapse. And gold rocketed to $800… a 700% gain.

South African gold stocks rose an average of 600% over the next few years. Most paid out more in dividends alone than it had cost to buy them.

In other words, for U.S. dollar-based investors, South Africa is one of the cheapest markets in the world right now.

Since 2011, the collapses of the price of gold and the rand have crushed South African gold miners. The stocks of some quality companies are down more than 80% from their recent peaks.

However, it now appears gold has bottomed. And this could be an opportunity to get a second chance at a market that has delivered Doug Casey one of his biggest investment hits ever.

Now is the time to take advantage of South Africa’s currency woes and pick up an elite mining company at an extraordinary price. South African gold-mining companies have delivered triple- and quadruple-digit returns in the past. In the coming gold bull market, I think some will offer a 10-1 upside or even better, just as they have in previous bull markets.

There is one such South African gold-mining company that trades on the New York Stock Exchange. You can trade it just like a U.S. stock. As long as you have a brokerage account, you can buy it with just a couple of mouse clicks.

Out of all the sectors, energy offers the best value right now.

In the past year, the price of oil has plummeted over 60%. At least 67 U.S. oil companies have filed for bankruptcy. Analysts estimate as many as 150 could follow. The industry is in “survival mode.”

However, this crisis is our opportunity.

It’s giving us a second chance to invest in the American shale revolution—this time with the advantage of hindsight.

Today, we can buy the “best of breed” U.S. shale oil company at bargain prices.

In recent years, technologies like fracking have unlocked billions of barrels of oil that were once impossible to extract from shale regions.

Out of all the U.S. shale oil companies, it’s in the best position to survive the downturn and deliver huge profits to investors.

This company has trophy assets in the major U.S. shale basins. It has a solid balance sheet. And, unlike many of its peers, it didn’t overleverage itself during the last boom.

It’s a cost leader and an efficient operator. Its profit margins are among the best in the industry. It has first-mover advantages. It is an innovator. And it has an exceptional management team that wisely allocates capital.

In short, it’s an elite business. And it’s a huge bargain.

Crisis opportunities like the two I mentioned today simply don't stay hidden for long. In short, the time to act is now.

Over the past several months, I've traveled 35,000 miles around the world, conducting “boots on the ground” research to hone in on the most lucrative crisis plays in the resource market. I believe I've found the best ways to take advantage of the coming crisis.

That’s precisely why Casey Research founder Doug Casey and I helped put together what could very well end up being the most important video in our company's history.

In this special free video, we reveal the exact secrets behind our lucrative crisis trading strategy.

You'll also get the full details on the two crisis moves I've mentioned today that have the potential to multiply your money 10 times or more. Click here to watch it now.