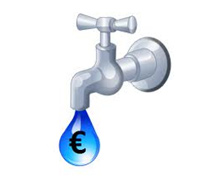 Recently, an HSBC depositor in Swindon, UK attempted to withdraw £10,000 from his account (which was in credit of about £50,000) and was told that he could withdraw no more than £1,000 without providing adequate proof as to how the funds would be used.

“HSBC will not let me take out anything over £1,000 cash over the counter. I gave them warning, but they say they must know what I will use it for—they want to see evidence of hotel bookings, etc. In short, they refuse to give me my cash. HSBC say it is new internal rules to help prevent money laundering.”

“In these instances we may also ask the customer to show us evidence of what the cash is required for. The reason for this is twofold, as a responsible bank we have an obligation to our customers to protect them, and to minimise the opportunity for financial crime.”

After less than a week of this policy having been implemented, it generated significant outcries from depositors—so much so that HSBC has already backed down. They had this to say:

“However, following feedback, we are immediately updating guidance to our customer facing staff to reiterate that it is not mandatory for customers to provide documentary evidence for large cash withdrawals, and on its own, failure to show evidence is not a reason to refuse a withdrawal. We are writing to apologise to any customer who has been given incorrect information and inconvenienced.”

So… apparently, it was a mere misunderstanding. Some mid-level manager apparently became overzealous in exercising what he considered to be “reasonable caution.”

So, what are we to make of this? Well, the message is clearly that we are to say to ourselves, “Cooler heads have prevailed. Tempest in a teacup. Problem solved.”

But this is not so. Similar instances of refusal to return funds over £1,000 have taken place in HSBC branches in Wilshire and Worcestershire in the past week. This tells us that this was an HSBC policy decision—that it came from senior HSBC management.

This attempt at greater control over depositors’ funds has a broader significance. Over the years, we have predicted that as the Great Unravelling progresses, we shall observe the seizing of wealth and monetary control by governments and banks, acting in concert.

Some will succeed, others will fail, but the central programme will move inexorably on. That programme will be driven by a new assumption—that the holding of wealth and the management of wealth are so central to national and international stability that only the central banks and governments can be entrusted with them. The individual cannot be trusted to control his own wealth.

The Bank Takes on the Role of a Regulatory Body

In floating this new policy, the banks have changed their traditional role as a monetary storage facility. They have now been granted the authority to refuse the return of funds that have been entrusted to them, based upon their authority to be satisfied that the money will be well spent by the depositor. If the depositor is, in effect, being expected to prove to the bank that he does not plan to perform a criminal act, the bank goes beyond its function as a business and becomes a regulatory body.

Without delving into conspiracy theories, there can be little doubt that the UK government has provided extraordinary latitude to HSBC (and presumably other banks)—latitude that, not long ago, would have been considered reprehensible.

However, throughout Europe, the US, and much of the rest of the world, we are seeing a growing tendency for governments to allow banks to control depositors’ funds.

As stated above, the 2013 Cyprus bail-in is a similar case—one in which the banks literally stole depositors’ funds with the tacit approval of the Cypriot government, and to much encouragement from the EU.

Since that time, Canada has passed legislation allowing its banks to do the same; and, more recently, the IMF has announced a similar plan for the EU.

As regular readers of this publication will know, we frequently publish reminders that, historically, when a nation is in the final stages of decline, the government invariably performs a last squeeze of the lemon—a final confiscation of the public’s wealth.

They tend to do this through whatever means they feel may succeed. As that is the case, in the future, we can expect to see increasing:

As these events unfold, the average depositor will be pressed to continue to function economically, but, as troubled as he might be, he will go along, as he really doesn’t have a choice. (Should he object too strenuously, he may well be investigated.)

Each of the above justifications for shutting off the money tap sound reasonable… It’s just that they happen to be a lie.

As stated above, when a nation is in the final stages of decline, the government invariably performs a last squeeze of the lemon—a final confiscation of the public’s wealth.

That process has now begun and will inexorably expand and continue until the confiscations have reached the point of greatly diminished returns or collapse of the governments’ power, whichever comes first.

If the reader sees this as even a 50/50 possibility, he would be wise to take steps to safeguard his wealth by removing it from a system that has become a threat to his continued ownership of his wealth.

Editor’s Note: The best way you can safeguard yourself and your savings from the measures of a desperate government is through internationalization. There are some very practical strategies you can implement from your own living room. Going Global from Casey Research is a comprehensive A-to-Z guide on this crucially important topic. Click here to learn more.