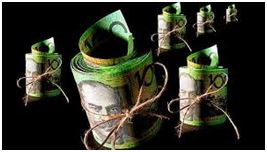 In the 1940s, Juan Perón decided to bypass economic prudence in Argentina, by taking an immediate approach to any given problem, without considering the entire system.

Do people feel they need more money? We'll just demand that everybody is paid more. Problem solved. Did that result in massive inflation? We'll just put a ceiling on what businesses may charge for goods and services. Problem solved… Oops – the economy collapsed. ¡Qué lástima! (What a pity!)

In spite of the disaster wreaked by the Peróns, many Argentines have continued to believe that his pie-in-the-sky concepts could somehow be realised. Argentine governments have periodically collapsed the economy. As most readers will know, Argentina is on the verge of its next collapse, under Perónist President Cristina Fernandez de Kirchner.

Uruguay is a small country, located just across the Rio de la Plata from Argentina. At one time called “the Switzerland of Latin America,” Uruguay has had a history of remaining humble in its “little sister” status, amid the much larger countries that surround it, and, in many ways, that has been its salvation.

Whenever there is economic chaos in Argentina, wealth tends to find ways to slip across the river to Uruguay.

At present, on any given day in Uruguay, if you bump into an Argentine friend, it is not unlikely that you may have a discussion with him about “getting his money out.” Many follow legal paths exist, such as finding ways to pay an Argentine company for services that will be performed in Uruguay. The goal is to pay in pesos and receive US dollars on the other end. Predictably, there are also many people who pursue more questionable practices, but as Argentines will say, their government may be corrupt, but it is not very organised. Therefore, seemingly risky plans are often successful.

As in all such national situations, when an economy crumbles, there are always ways to get around the system, and there is always an outflow of wealth. However, those who make their homes in large countries often overlook an interesting fact: If a country is small and has set itself up to welcome influx from other countries, the actual percentage of wealth necessary to create a veritable boom is quite small. In such a situation, it is always advantageous to be the smaller country.

Uruguay is largely self-sufficient in most things and, in normal times, bumps along quite nicely. But, at intervals, its larger neighbour gets into economic troubles and, soon, the money begins to move across the river, creating a mini-boom. Whenever this occurs, the effect on Uruguay's economy is disproportionately large (Uruguay has a population of less than 3.5 million, Argentina has 42 million people).

And the Argentina/Uruguay relationship is by no means unique. Most no-tax and low-tax jurisdictions tend to be small. The tax haven concept was based on the principle that each haven needed attract only a small percentage of the money that moved from large countries, if the haven were to thrive. The small size of most tax havens is not an accident; it is an inherent feature.

The flip side of this relationship is that the governments of larger countries tend to be very envious and resentful of the prosperous little countries and often bully them, doing their best to limit the havens' abilities to do business.This trend is being seen today with such efforts as the OECD’s tax haven blacklist and the FATCA legislation in the US. However, at the same time, the leaders of the same large countries may wish to keep the havens' services intact, so that their own wealth might be retained there.

Whilst this push-me-pull-you relationship carries on over the decades, the average citizen of the larger country is likely to take little notice. However, as the Great Unravelling progresses, we are likely to see the EU, the US, and other large jurisdictions follow along the storied path of Argentina. Certainly, the playbook will be much the same, and the leaders of the major First World countries are doing a bang-up job of following the course of monetary debasement, complete with knee-jerk economic and social controls.

Many in the First World are predicting that we are on the verge of an economic collapse that will bring about the destruction of wealth, but this is not so – or at least the second part is not so. Yes, there will most certainly be a collapse, but, historically, wealth is not destroyed in such situations, it merely changes hands.

If the reader has wealth that he hopes to retain within this period and he is a resident of a large country, this may be a good time to review the relationship between large countries that have big problems and small countries that quietly provide solutions.

It is likely that the reader is already well aware that small jurisdictions, such as Singapore and Hong Kong, are attracting a share of wealth that is beyond what their size would naturally dictate. The amount of wealth per resident in these jurisdictions is high. Of course, it is by no means evenly distributed, but the very fact of its presence means that opportunities abound in these havens.

For every door that closes, another opens.

As the First World slides further into depression, we can expect that those smaller countries that are more forward thinking (and less oppressive of their populations) will provide expanding opportunities for those living in larger countries. It should not be surprising for North Americans to find that smaller jurisdictions seem somehow to be thriving whilst their own country is declining. In fact, what may occur is that the smaller countries that emerge in this period will actually become more promising and more prosperous in a clear inverse relationship to the decline elsewhere.

As one diminishes, the other grows.

It must be borne in mind, of course, that not every small country will seize the opportunities that will be created. And certainly, they will not be uniform in how they handle the opportunities. However, as the present situation progresses, the number of options will increase. Wealth will move and the world will change shape as regards monetary strength.

Move it or Lose It

We essentially have three options with regard to this eventuality. If we are in a large country that is in decline, we can:

Number one above is clearly the most foolhardy, yet that is what the vast majority of people will ultimately do, either out of ignorance, procrastination, or both.

Number two would seem to be the obvious choice, except, as mentioned, history shows that governments, when they perceive a crash, tend to institute currency controls prior to the crash. The creation of currency controls is under way in Europe and the US, and it is a safe bet that more are on the way.

We are in a period in which the rules of the world are changing. Many of those who are accustomed to living in large countries are saying, “We're headed downhill here in Europe, but where could we go? The rest of the world is in the same shape.”

Not so. Whilst it is quite true that many of the world's largest countries are in serious trouble, there are other choices beyond those whose main attraction is size. In fact, some of the greatest opportunities may well be in the smaller jurisdictions.

You can learn all about these jurisdictions as well as the specifics on how to best realize the diversification options they offer (obtaining second passports, offshore companies and bank accounts, foreign real estate, physical gold storage abroad, and much more) in our Going Global publication.