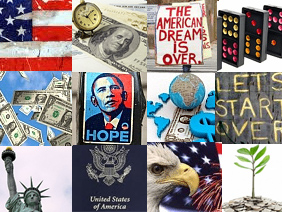 Readers of this publication will no doubt already be of the opinion that the economic future of the First World in general and of America in particular is headed inexorably downward. What many disagree on is how America will behave after the Great Unraveling has occurred – after the next crash of the stock market, the defaults on debt, hyperinflation, etc. Once America has purged itself of the poison in its system, it will look around at the damage and begin to pick up the pieces.

Right now, most of us are focused on the collapse itself, but a few forward thinkers are already imagining the state of post-crash America. Some of those who have thought about the subject have said that they expect a bright new awakening – a new start on a clean slate.

I would like to believe that this will be the case. However, rather than being “eternally hopeful” for mankind, I suspect that if I first take the pulse of the people who are going to effect the change my predictions for the future are far more likely to be correct. While events change over time, human nature remains the same throughout the ages. People almost always follow their nature, regardless of events. (If this were not true, every American would now own gold and be internationalizing himself. The fact that more than 99% have not done this suggests that, for most people, human nature trumps reason every time.)

Those who see a bright new awakening often refer to “the American Pioneer Spirit.” While politicians love to refer to this spirit, in truth it is long gone from the average American. It is, however, undeniable that the pioneer spirit was in abundance in America two hundred years ago. So why should it be any different now? Let's step back and look at this.

In my own country of the Cayman Islands, half of the population is expatriate, coming from over 120 different countries around the world. It is a very vibrant society, with people coming and going every day – a constant flow of fresh ideas. But then, my country is still in its pioneer stage. Although it is quite sophisticated, there is a spirit of adventure in the air.

In the eighteenth century, America was like this. Thousands of people (mostly from Great Britain) were making their way across the Atlantic in search of a brighter future. These people were undoubtedly adventurers, as their future was far from guaranteed. But what about the non-adventurous Brit? Well, they stayed behind. Although many of them did not live well, rather than risk uncertainty, they accepted their humdrum lives and frowned on the adventurers as reckless fools.

Adventurers are never in the majority. They are a small percentage of any population – perhaps less than 10%. This tells us that America was created by the most adventurous Britons; the people who were the most willing to risk all for a perceived opportunity. Therefore, once they had settled into the New World, had started their farms and begun to build their cities (and infused their children with their spirit), they had already proven their ability to create their own destiny. In terms of morale and self-confidence, they were peaking. Not too surprising that these same people were once again willing to risk it all in 1776 and start over as a new nation.

Fast forward to 1989, when the Berlin Wall was knocked down. Everyone on both sides cheered, but, almost immediately, there were social problems. Although the East Berliners were pleased to be able to work in West Berlin and were thrilled to be able to shop there, somehow they had assumed that they would still receive all the socialist benefits that they were accustomed to. They most certainly objected to the ambitious pace of work in West Berlin and, ultimately, large numbers of East Berliners actually began to ask for things to go back to the way they had been in the communist era.

Now, bear in mind that, in 1945, Germany had been defeated in a war, and had to then undergo the grueling task of rebuilding, but this in itself was an effort that called for a pioneering spirit. By 1989 they had rebuilt West Berlin and the economy was thriving. By contrast, the East Germans, who had the same genetics, had spent the last four decades in a communist system and had largely lost their ambition to the salve of statism and entitlements.

This, to me, is very telling. While some 90% of any population is, by nature, not especially adventurous, it is my belief that two generations of statism will virtually eliminate any remaining sense of adventure and self-determination. Such people are no longer capable of coping with a pioneering situation.

So where does this lead us with regard to post-collapse America? Many of those Americans who had been adventurous would have already expatriated, as they are doing now in ever-increasing numbers. While it is true that some of these may return following the collapse to be a part of the new frontier, many others will have found happy homes elsewhere. Therefore, there will be fewer leaders to show the way.

More to the point, the majority of Americans will have the same difficulty as the East Germans: an inability to adapt to a pioneering situation. Many will vainly cling to the hope of a restructured nanny-state. This, of course, may not be possible, but their hopes will be kept alive by a new wave of politicians who will be only too eager to promise future entitlements. (History shows that those whose entitlements have been taken away tend to fall into victimization mode and vote for whoever promises a return to entitlement, however unlikely.)

I expect that, ultimately, America will be rebuilt in some form, possibly as a single country, possibly as fifty sovereign states and possibly as groupings of states, based upon similarity in mindset. (A map of the current blue states and red states may indicate how a split might occur.) However, human nature being ever-dominant, I expect that a true resurgence will take a generation or two.

And recover, it will, as the resources are still there. Some of the largest oil reserves in the world exist in America, as well as millions of acres of excellent farmland. Oil and agriculture will be major economic drivers in the coming decades and, in these resources, America has its greatest promise.

In the end, the speed of the resurgence will depend, as it always does, on the percentage of those on the ground who are prone to be pioneers.